(An invitation to actively imagine worlds, probe at cataclysms, and rehearse futures.)​

[work-in-progress, 31/12/21, midday]
​[Playa de San Juan - Alicante, Spain]
​
​[[This is a companion piece to ALL WITHIN A COLLAPSING BUILDING (a septet for the apocalypse). Both works are in deliberate conversation with one another, forming a kind of diptych for the end of times.]]

ALL TOMORROW'S TOMORROWS is a highly interactive performance-installation where everything is built, shaped, destroyed, explained, rebuilt and resolved by human hands, the audience's hands. The piece gives participants agency to the point of being truly collaborative, allowing each individual to co-author their own experience and take the reins of their own narrative(s). Whilst it does not make any therapeutic claims, the experience is based on sandplay therapy (called sandbox or sandtray therapy more generally). This psychotherapeutic technique was developed in the late 1950s by psychologist and Jungian analyst Dora Kalff, who combined several techniques and philosophies (including Dr Margaret Lowenfeld's 'World Technique') with the aim to bring into consciousness subconscious content through non-verbal and symbolic play, with the aim to ultimately resolve emotional issues.
​
​ALL TOMORROW'S TOMORROWS is guided by a similar ethos of self-reflection and 'healing', although instead of being a platform to identify, work-through and process personal issues and trauma, it is designed as an experience to address, dwell on, and begin to imaginatively resolve the global challenges humanity faces: climate and environmental collapse, social inequalities, resource scarcity, the future of cities, migration... Each person, transcending their personal plane, imagines three scenarios at a global scale from their uniquely personal angle and positionality. In their interaction with the work, participants literally bring themselves to and put themselves on the table in order to tackle the big-questions humanity faces; enacting their own specific concerns, priorities, fears, hopes, and fantasies.

The work also draws on Edward de Bono’s notion of lateral thinking or ‘horizontal thinking’, a philosophical approach that cultivates an awareness of and preference for out-of-the-box, unexpected solutions to problems. It is built on the observation that we often lean towards straightforward, obvious solutions to problems, and instead encourages us to seek out more oblique, innovative answers, helping us to come up with more innovative solutions. De Bono’s four techniques for lateral thinking (awareness, random stimulation, alternatives, and alteration) are all at work at various stages of the participants’ experience.
​
Recorded by Guillermo Alcalá-Santaella (Marallavi Films) and edited by Pablo Pakula. 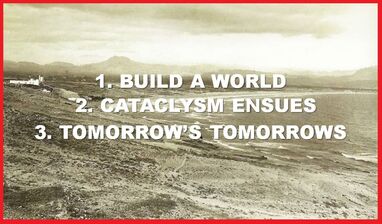 1. Build a world: The participants are invited to build a world upon a square table covered with sand using a variety of small objects, detritus, scraps and domestic refuse (materials are sourced locally, giving the work an idiosyncratic aesthetic with each iteration). This opening section encourages participants to enter a child-like state of mind through world-building. It is the power and freedom of this playful energy the work tries to harness in the third and final section.

2. Cataclysm ensues: Participants imagine and play out a cataclysm onto that world, a sudden disaster or violent event of a specific socio-political, environmental, cosmic and/or fantastical nature. During this section participants can let their personal apocalyptic concerns and visions run wild, as they enact destructive and fundamentally transformative changes upon the world they have just created.

3. Tomorrow's tomorrows: Participants are challenged to imagine and play out what might happen next, after the catastrophe, once the dust has settled; indeed, to imagine and rehearse the new beginnings beyond the ‘end’. It is in this section that the work becomes truly generative and constructive. Participants are driven by the playful energy harnessed since the first section and, responding to the catastrophic situation they have created in the previous section, have to deliberately engage in lateral thinking to consider a way forward to alternative futures.

Since participants have autonomy and agency over their choices, the performer begins by simply facilitating their experience in a practical capacity (i.e. helping to world-build according to the participants' instructions, or clearing objects from the table when necessary). After each of section has been completed, the performer invites the participant(s) to step back and observe the world-situation they have created; and through a process of gentle Socratic questioning, encourages them to narrativize their choices and reflect upon them critically.